When our association MS-52 had decided to apply for the second time (1996 Mynämäki) to organize the Youth Jukola, I was commissioned to investigate a suitable terrain and competition center. When the sports center in the home municipality has hosted Youth Jukola 1996, and now in night-FC 2010, I turned my eyes to the neighboring municipalities.

I went through two sports center in the neighboring municipalities and their terrain, spend a couple of days in each, and made a rough version of the track to the very old orienteering maps. The maps were also provisionally updated. Something seemed to have changed in the terrain in 30 years that had elapsed since the last survey. Of these alternatives, we decided for Vehmaa. That application was accompanied with a plan for land use and full courses in orienteering map of 1978 at a scale of 1:15 000th The total package of map and competition center were considered worthy of Youth Jukola also by the surveyors of the managing bodies  and the contest came to us.

The first version of the new map was completed by Raimo Jalonen just before Christmas 2010 and I started immediately with my course setter collegue Timo “Køkken” Kokko course setting work. We’re both familiar with the Youth Jukola concept from the past. I personally have been involved from the very first event in Lahti Ski Stadium, that time, however, as a coach. At the place was also Kokkens, but as a runner. Youth Jukola course planning back in 1996 in Mynämäki sports center is still fresh in my memory. From course setters point of view the only change is that there are modern technologies and methods to facilitate the following of the competition. Already in the spring, there were plans on our computers and in May gave the supervisor Ilkka Saarimäki the green light for our plans. Controls were marked in the terrain and some preliminary test races in June confirmed our expectations that the terrain is ideal for Youth Jukola. Competition center is located in the terrain so that the race can easily be followed as a spectator control at stages 1-2 and 5-7 could be located on the outskirts of the competition center.

The terrain is fair for all young people, because none of the participants have raced there, as there has not been a map around for decades. Rapakivi based crags (rapakivi is a sort of granite found in southwestern part of Finland) with consistently good accessibility makes the terrain easily run and the sugar on top is the possibility of choosing for the longest courses some dense, young forest. Visibility is good and in some places very good, due to the bare crags and forestry in recent years. The green color is rare on courses and can in winter become even rarer if planned loggings are implemented. What is certain is that the young are not offered the jungle of trails to base their route choices on. Of course, 1.5 km jogging track and the same length ski base facilitates orienteering. The whole area is clearly limited; especially for the youngest contestant on the 3rd and 4th stage many large, clear objects create sense of security. The oldest boys can possibly run under six minutes per kilometer, and the girls will run maybe one minute per kilometer slower.

Old map of the terrain. 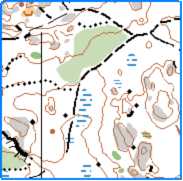 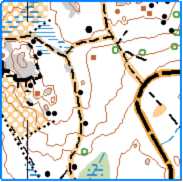 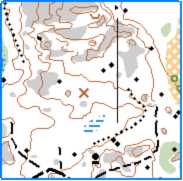 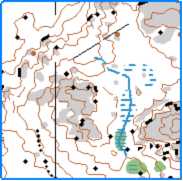 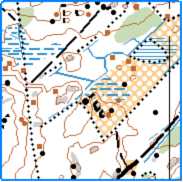