There will be nine training maps made available during the summer, one of which “Lahti Sports Center”, will not have any control point. The training areas will be opened at the end of April depending on the capacity of the parking places. ore detailed dates will be found with the introductions of the areas. The parking site at Kukonkoivu will be closed after 12th June 2018. There will be a substitute parking place in Kukonkoivu during 13th June till 14th June, see the map lower. 15th and 16th June the terrain is available only from Jukola competition center.

Please follow all parking instructions and keep the parking areas clean; thanks in advance. 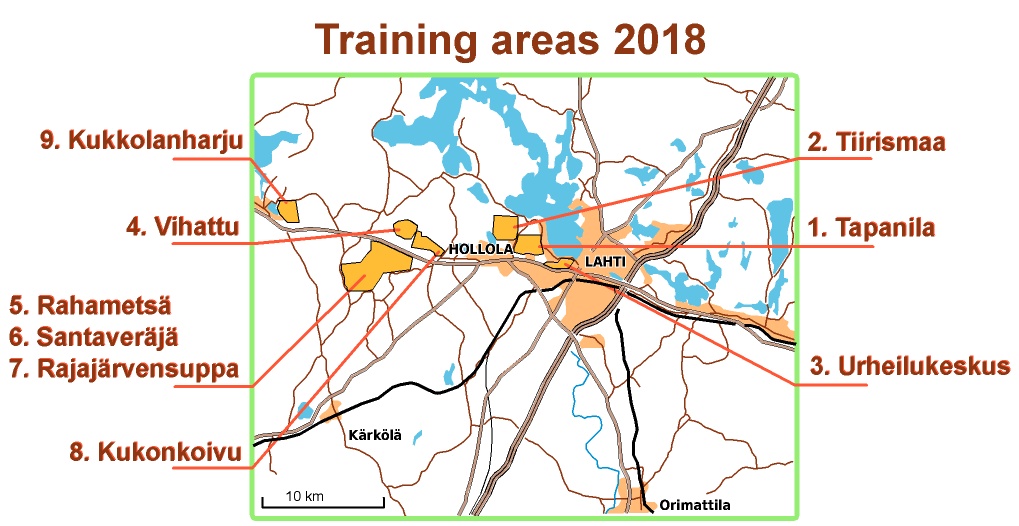 Parking: marked on the orienteering maps and on the location maps on the web page.

A 6,5 km long course which is especially intended primarily for night orienteering. The map is designed without any paths but for the young or more inexperienced runners there is also a map including paths available. The course designer is Teemu Niskanen.

An area with lots of paths and good runnability, heath forest with areas of large depressions and areas of small depressions.

Parking: There is a large parking area at the end of Mäkirinteenkatu (Street).

An extract from the statement of the course designer of Hollola-Rastit, Juhani Jaskari:
The ridges and slopes around the 327 meters high TV-mast at the top of Tiirismaa hill have a large number of adjacent re-entrants, hollows, mounds and rock faces. The area north of the mast is flatter but consists of lots of depressions.

Parking: Parking is available on the premises of SEW-EURODRIVE, Muovitie 1.

An outdoor recreation area with lots of paths and good runnability. Some areas have depressions.

There will be no control points in this area.

Parking: Parking is available at the Lahti Sports Center, Salpausselänkatu 7. Note that the parking time is restricted / parking disc. 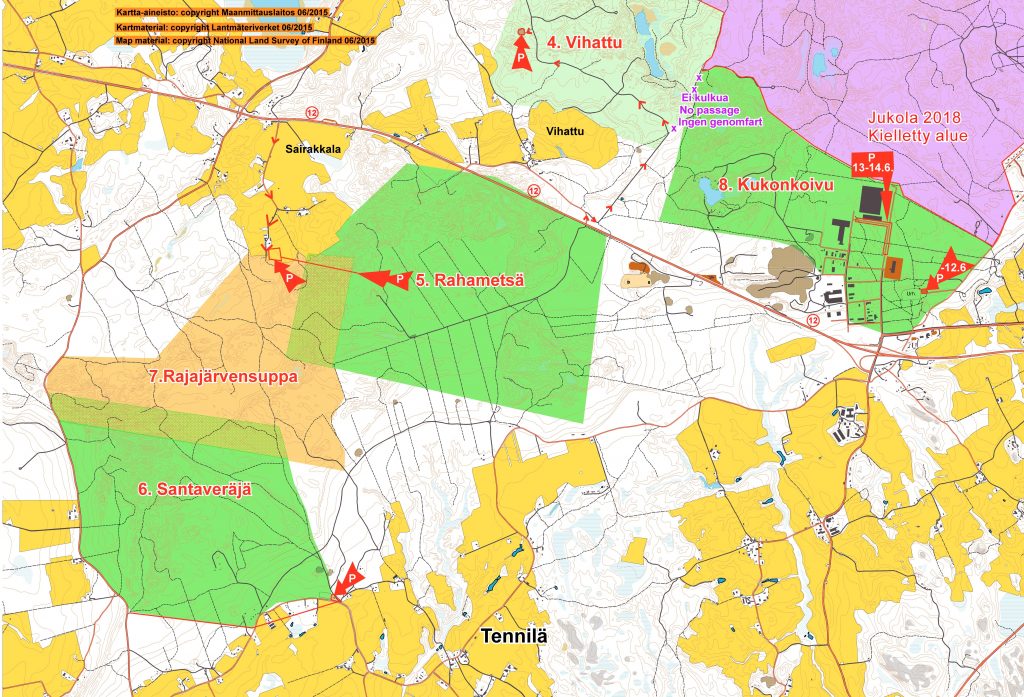 A training area in the immediate vicinity of the competition center. Due to the expected high volume of runners this area has been designed for all different distance trainings from which runners can design their own course. Also suitable for night orienteering. The course designer is Philipp von Arx.

Heath forest with depressions, in some places slow, stony ground.

The area has a practice ban and training on old maps, for example, is prohibited until the completion of the European Under 16 & 18 qualifying competition.

Long distance training that offers longer route selection intervals. The terrain offers a variety of fast, flat heath forests and deep depressions. The total length of the training is approximately 12 km with plenty of correction possibilities. The course designer is Aleksi Anttolainen.

Parking: Suontaustantie, In a Meadow

6. Santaveräjä: Opens at 28th of April

3 x 2 km interval training with forking (so called one-man relay) The total length of the training is 7 km. There are 4 different courses with forking.

The aim of the training is to offer different types of relay situations with diverse forking whilst being able to maintain a good running rhythm. The course designer is Aleksi Anttolainen.

Parking: on the both sides of the building in Tennilä’s sports field, Tenniläntie 800. Driving on the proper sports field is forbidden.

7. Rajajärvensuppa: Opens at 5th of May

The course designer, Minna Kauppi, has designed the training around the theme of “rhythm disorder”. The exercise is a straightforward directional orientation, but you have to be really careful. At times, progress can be slow with demanding depressions, so the pace needs to be slow and map reading becomes more crucial. It is also possible to practice the exercise as a relay, as there are 4 different forking paths available. The total length of the training is approximately 7 km. The course designer is Minna Kauppi

Parking: Suontaustantie, in a Meadow

8. Kukonkoivu: Opens at 21th of April

A fast paced heath forest adjacent to the competition ground, where the northwestern part of the terrain has a more technically demanding area of depressions. Due to the expected high volume of runners this area has been designed for all different distance trainings from which runners can design their own course. The course designer is Juha Hirvonen.

Parking: Parking is available at Kukonkoivu Sports field which is located at the end of Juoksijantie. The parking site at Kukonkoivu will be closed after 12th June 2018. There will be a substitute parking place in Kukonkoivu during 13th June till 14th June, see the map lower. 15th and 16th June the terrain is available only from Jukola competition center.

9. Kukkolanharju: Opens at 28th of April

The exercise has 3 separate routes of lengths 5.7 km, 5.0 km and 5.5 km. Each route is designed to be different and there are no same legs. Thus three runners can start at the same time or one runner can run several routes. The routes cross each other which means that paths created by earlier runners do not necessarily lead to the same control point.

The best area in the terrain where the routes have been designed is actually named mini-Hälvälä. All the same types of terrain can be found in the coming Jukola competition, but in a smaller area. The area offer both hilly and a more flatter area of depressions, trails, some rocky terrain and a small area of old mossy spruce. The course designer is Ari Anjala.